The draft Master Plan for Delhi 2041 was approved by the Authority on 13 April 2021 and notified on 9 June 2021 to invite objections and suggestions. The draft MPD 2041 was open for public scrutiny for a period of 75 days, during which the DDA received about 33,000 objections and suggestions from the public. According to sources, the advisory council of DDA has reviewed the draft MPD 2041 in April 2022 and it will be placed before the authority for final approval.

Vision and Objectives of MPD 2041

The Delhi Master Plan 2041 aims to introduce a comprehensive plan that will provide a strategic and enabling framework for the growth and development of Delhi. The vision of the MPD 2041 is to ‘Foster a Sustainable, Liveable and Vibrant Delhi’. It envisages the city achieving the vision by increasing privatisation, concretisation, attracting investments, etc.

The second objective is to facilitate economic development. This objective promotes cleaner economies that are unique to Delhi while also ensuring symbiotic linkages with NCR, improving the overall investment climate and support a variety of work and workspace typologies.

The third objective is to enhance heritage, culture and public life. It includes safeguarding and augmentation of heritage, building strong economic linkages and creating experiences for cultural tourism.

The fourth objective is improving housing and social infrastructure. This will cater to the variety of housing demands across income groups. MPD 2041 also aims to promote regeneration of older built environment, foster walkability in mixed-use neighbourhoods and provides for social infrastructure in all areas including the dense areas of the city.

The fifth objective is to move towards low-carbon mobility by encouraging a modal shift to public modes of transport, and provide affordable and efficient green mobility options.

The sixth objective is to develop a resilient physical infrastructure. It seeks to promote sustainability by moving toward the use of energy efficient measures and facilitating effective services to prepare the city with digital infrastructure and stimulate resilience to shocks and disasters.

These objectives are further explained below as per the provisions available in the Delhi draft Master Plan 2041.

Key Highlights of the plan

MPD 2041 is a vision document for the future development of National Capital of Delhi, that includes sector-wise policies specific to shelter, economy, environment, mobility, social and physical infrastructure, heritage, etc. Delhi is one of the most populous cities in the world and has second largest in-migration in the country. It estimates that by 2041, Delhi would cater to a population of 29.1 million people. With an area of 55,803 sqkm., Delhi NCR is surrounded by four important cities from the states of Uttar Pradesh and Haryana. They are Gurgaon, Faridabad, Ghaziabad and Noida. 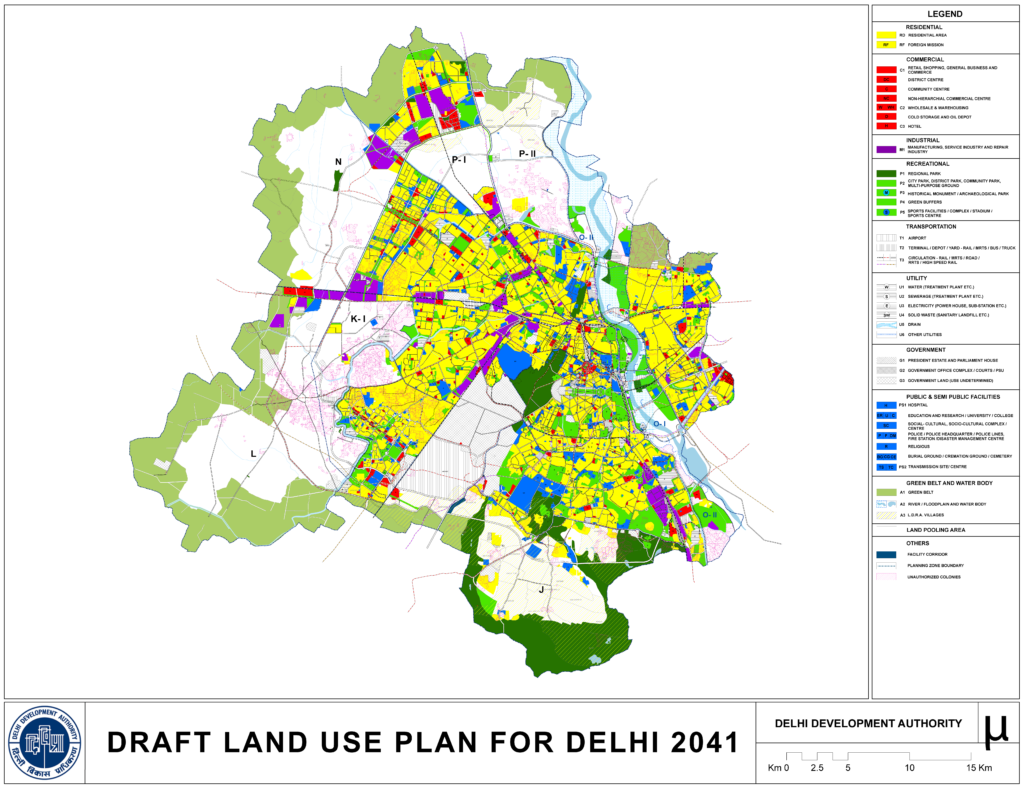 Proposed Land Use Plan of MPD 2041

The land use map of MPD 2041 marks the proposed land uses, unauthorised colonies, low-density villages, land pooling areas, and the green belt. Some key highlights of the draft MPD 2041 are given below:

The new plan addresses improving the water quality, including the water taken from the river (Yamuna), lakes, natural drains and baolis. The plan also addresses pollution and climate change, and explores strategies for improving greens and promoting cleaner economic activities. Yamuna river, which is severely polluted, has been identified as a green-blue asset, whose maintenance will be significant to augment the water supply in Delhi and boost greener economy. As part of the Delhi Spatial Information System, a database of green-blue infrastructure of the existing and potential areas will be mapped and maintained by the concerned agencies.

The plan provides for cleaner economies and supports the informal sector and unorganised economies which include waste workers, street vendors, household industries, etc. The plan also promotes night time economy (NTE), which will be the first of its kind in the masterplans of Delhi and the country. This will be explored by improving Delhi’s nightlife with sports and entertainment facilities, cultural activity, retail stores, themed night walks, utilisation of work spaces, special metro and bus routes.

Delhi has a rich historical background with a large number of heritage sites, including the centrally protected, state protected and several local sites. The plan aims to formulate strategies to utilise the rich historical and cultural capital to boost the economy with provisions for the preservation and adaptive reuse of the cultural precincts. The plan has also introduced the heritage transferable of development rights (TDR). Further, the plan identifies opportunities for fostering city level hubs and networks for public life by creating city level circuits and nightlife circuits.

The plan provides a framework for meeting the projected housing requirements and facilitates both improvements in existing housing stock as well as the creation of new housing inventory. It also provides for regeneration of unauthorised colonies. The plan has also introduced tools like amenities Floor Area Ratio (FAR), and simplified norms for social infrastructure to allow new uses as well as improve the availability of facilities in dense areas.

To minimize vehicular pollution, the plan prioritizes pedestrians and cyclists will be prioritised and incorporate various strategies such as adopting transit-oriented development (TOD), switching to greener fuels, etc. The plan also facilitates integration across various modes of transport such as metros, railways and bus terminals in Delhi. Further, technology-based interventions that include a unified ticketing system, smart mobility applications, and common fare management systems will be facilitated.

Policies for integrated water resource management will be focused for long term water security in Delhi. To address water scarcity, per capita norm for water has been reduced from 60 GPCD to 50 GPCD. Further, 100% wastewater is to be treated and maximum reuse of the treated water is encouraged in existing developments and mandatory in new developments. The plan promotes decentralisation of wastewater treatment, recycling and reuse of solid waste and water, green buildings and use of clean energy. Further, the plan also provides for digital and gas infrastructure.

The Delhi Development Authority’s Master Plan 2041 will act as a framework for the development of Delhi for the next two decades. While some experts have applauded the MPD 2041 for bringing in new set of guidelines and norms to regularize the city, others believe that the plan does not have sufficient provisions to address several challenges.

Three plans later, MPD 2041 is the first to promote nighttime economy, heritage TDR, green-blue policies, green and digital economy, showcase locations of unauthorised colonies, etc. However, the draft plan still fails to address the issues of fair land use, affordable housing, infrastructure for differently abled people, and several more. Some of the issues were convened in the hearings by the board of enquiry set up for hearing and considering objections and suggestions of public on draft MPD 2041. As per sources, several suggestions from the public and experts have been incorporated into the Master Plan of Delhi 2041 and is to be notified soon.